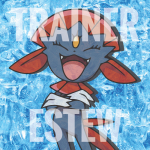 Hey guys, my name is Estew02, and I'm the former Co-Owner of this wiki alongside User:Silence Must Fall. I left this wiki (roughly) March 2015.

Nuzlocke Quote: With every devastating loss, comes a wonderful victory.

SoulSilver(Again)- Lost (Forfeit, no way to train after losing half my team)

R.I.P. Pedro
Add a photo to this gallery

This is a section containing trainer cards of my team when I either win or lose a Nuzlocke.

For my SoulSilver Nuzlocke.

Pokemon X- Won
Add a photo to this gallery
Retrieved from "https://pokemonfanfiction.fandom.com/wiki/User:Trainer_Estew?oldid=61921"
Community content is available under CC-BY-SA unless otherwise noted.