This Pokemon was previously believed to be a younger version of Kangaskhan due to its similar cry and DNA, but Intimas scientists discovered a difference in DNA, and made Kangaskid its own Pokemon, only in Intimas.

In the past, this Pokemon was thought to be a baby of its evolution due to its similar features. This Pokemon is always alongside its mother. 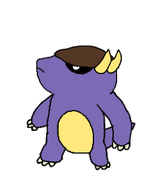 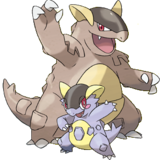 Mega Kangaskhan with Kangaskid
Add a photo to this gallery
Retrieved from "https://pokemonfanfiction.fandom.com/wiki/Kangaskid?oldid=92520"
Community content is available under CC-BY-SA unless otherwise noted.